That spiky hill in Goffstown

The twin Uncanoonuc hills in Goffstown are my landmarks for knowing I'm nearly home whenever I come back from even a short trip out of my area. North Uncanoonuc looks forested and fresh, while South has 14 antennae and cell towers on its summit, making it look a bit like a geographic porcupine. I can't complain too much about the towers, since I like having cell service & similar conveniences. Any map I consult calls these the Uncanoonuc Mountains, but when you read that, bear in mind that these "mountains" top out around 1300'.

North Uncanoonuc is always pleasant, with good views, no power lines, & no towers. Today, though, I wanted to check out the trails on South. Goffstown has produced a terrific map (www.GoffstownTrails.com) showing not just the old hiking trails, but also the snowmobile trails that snake over & around both peaks. Mountain Road between the hills has several parking areas for hikers, and the entrance to the Reservoir road off Mountain Road now has a parking area with a map kiosk. 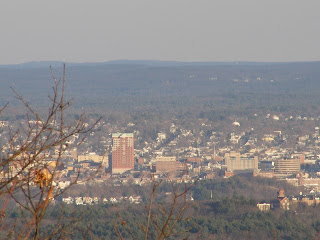 I started up South Uncanoonuc from the kiosk for a short late-afternoon hike, carrying the map I had downloaded & printed. Conditions are typical for November. South's trails are covered with slippery oak leaves, and a few of the boggy spots already have a thin skin of ice. Major trail intersections have either snowmobile signs or trail markers. Most minor trails as shown on the map are easy to spot, though they're unsigned. A power line cut across the slope includes a well-defined trail, which today saw bike traffic along with a few hikers. It was a great day to enjoy the view of Manchester (see photo) from South's summit ledges. I could almost forget that a cell tower was right behind me.

If I had had more time, I could have continued down the other side of South Uncanoonuc on either of two trails that end at Uncanoonuc Lake. A full morning or afternoon could easily be given to wandering these trails and visiting both summits. Bring water & snacks - the closest store & restrooms are on Mast Road, a couple of miles north of the trail kiosk on Mountain Road. There's a paved road from South's summit to Back Mountain Road, and if you want a good workout without going into the woods, you can drive to the summit (no good parking at the base)and walk down to the base & back. But why would I want to avoid the woods on a day like this?
Posted by Unknown at 9:52 PM